$8.6 Million for Crashing into a Pig

Last Friday a jury in Monterey County California ordered the state to pay $8.6 million to a motorcycle rider who was severely injured when he crashed into a herd of wild boar on a state highway in 2003. Adam Rogers will receive the money because his lawyer successfully argued that highway officials knew that wild pigs regularly crossed a stretch of highway 1 just south of the Carmel River. Knowing that the pigs repeatedly crossed at this location and doing nothing to prevent their crossing or to provide for alternative safe crossing points the officials allowed a dangerous situation to continue. 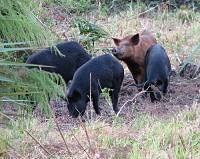 Rogers, a 45-year-old former karate teacher and champion kick-boxer, suffered serious injuries and is now confined to a wheelchair. He and his wife sued the state Department of Transportation in Monterey County Superior Court. Most of the $8.6 million award will go toward Rogers' medical bills. Rogers requires around-the-clock care and won't walk again. He said he still suffers from gaps in memory as a result of massive head injuries he suffered when he was thrown from his motorcycle. Rogers' wife, Kristin Finn, also was awarded $500,000 for “loss of consortium.”

When someone knows or should know that they are allowing a dangerous condition to exist which will more likely than not place someone, through no fault of their own, to become the victim of a crash they should be held liable. The seemingly staggering sum is not all that staggering when one considers that the victim here is now crippled for life and will require care for the rest of his life. All of htis simply becasue noone chose to take responsibility and make sure the wild pigs and motorcycle riders would both be safe.