Are You Refusing Your Ambulance Ride

Chances are that when you are in a motorcycle crash you will be seriously injured. With or without your knowledge the Emergency Medical System will probably be activated with police and ambulance crews arriving at the scene of the motorcycle or scooter crash. The first priority for the police and the ambulance crew is the well-being of the injured.

If you are conscious you may think about refusing the ambulance because you may not be able to afford the cost. The average cost of an ambulance ride in Salt Lake City is about $1000. According to an article in the Deseret News thousands of injured Utahns refuse ambulance rides after being injured. If you are not at fault for the crash this expense will eventually be paid for by the offender's insurance – presuming that the offender has insurance. Do not refuse the ambulance ride. Like the ambulance crew I am also interested in your well-being – your financial well-being. The ambulance personnel, your doctors and hospital staff will help you recover physically but I will help you recover financially. 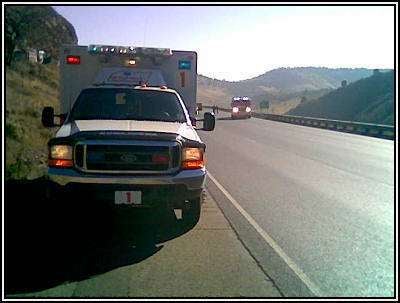 To properly and thoroughly prepare your case for either settlement or trial we need to have objective evidence of your injury. Objective evidence is evidence other than your word or observations about how much you have suffered. We need the ambulance personnel to note where your injuries are, what had to be done to you at the scene, to chart the medications they administered, the intravenous fluids you needed, your behaviour or the need for spine precautions if your spine is suspected of being injured. The list of treatment rendered by ambulance personnel can be very long and is objective evidence of your injury. The ambulance records start the objective chain of evidence I need to properly create a detailed settlement brochure that will help the insurance company to offer you fair and full settlement value for your injuries. If the insurance company does not want to settle your motorcycle crash claim we may have to go to trial. The same evidence created by the ambulance crew will be used at trial to objectively show that you were severely injured as a result of the motorcycle crash.

Of course all of the other objective evidence will also be used including your hospital records and your doctor notes as well as physical therapy and other practitioners. All of these are sources of objective evidence that will go to proving your harms and losses. Knowing how to prepare and fully present all of your injuries and making sure you are financially compensated is my job. For your physical and financial well-being do not hesitate to accept a ride to the hospital by ambulance.