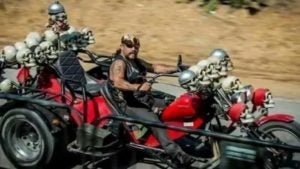 To break from the crashes and the mundane blogs, I thought that I would share some crazy motorcycle facts and tidbits of knowledge. Some of them are comical and some of are just crazy. I want you have some things to say next time you have a block party or ride with your friends.

To Helmet or Not to Helmet?

There are different laws in the United States about wearing a helmet. There are only three states in the United States that do not require motorcycle riders to ride helmets. Those three states are Iowa, Illinois, and New Hampshire. Twenty-eight states require helmets for certain riders. Nineteen states, including the District of Columbia, require helmets for riders of any capacity (driver or passenger). Of course, when riding across the nation you should conform to the requirements of each state—PIA we know;))

This is one of those facts that is hard to comprehend! Emilio Scotto holds the world record for longest motorcycle ride. This ride spanned over ten years, 279 countries and over 450,000 miles. What?! That's almost half of my life! It's almost like a Forest Gump story, ride and ride until you just don't feel like it anymore.

Doug Domokos was nicknamed “The Wheelie King” after going on record for the longest wheelie of the time. He did a wheelie for 145 miles! However, his wheelie record was broken eight years later. Regardless, Domokos was inducted into the American Motorcycle Association (AMA) Hall of Fame in 2002.

There are so many other more technical and crazy facts that we found! Here at Utah Bike Law we are very interested and passionate about motorcycles and you. If you are in an accident, call us and get a free consultation.