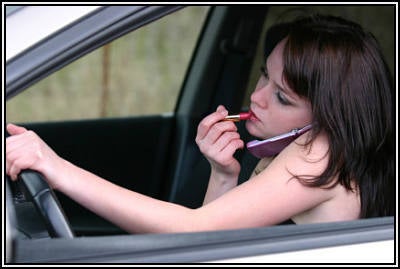 Eighty percent of American drivers believe hands-free devices are safer than using a handheld phone. Eight percent of American drivers are mistaken! More than 30 studies show hands-free devices are no safer because the brain remains distracted by the conversation. When talking on a cell phone, drivers can and do miss seeing up to half of what's around them, such as traffic lights, stop signs, pedestrians, other cars, and motorcycles.

There is simply no safe way to use a cell phone in a vehicle! Everyone should pledge to abstain from using a cell phone while driving. You and your friends can take the pledge and share it with others at the National Safety Council website.

Just this past weekend my wife and I went for a long motorcycle ride in what we call in Utah the West Desert. It is a lonely place with a few scattered small towns and one is called Tooele. We were cruising along and were passed by a car with a large dent on the left front. The car blew by us doing about 80 mph in a 60 mph zone. Then the car slowed to about 50 mph, then started to weave back and forth in the lane. It eased to the right and the left and went through an intersection where another driver was turning left – missing it by a foot or two at the last moment! We pulled up beside the weaving car and there sat a young girl with her head down texting away – she was oblivious to our motorcycle…or anything else. We dropped back to make sure we did not become a statistic.

About three miles later a police car blew past us (thought he was pulling us over for a second) and pulled over the young girl. They got her out of the car, did field sobriety tests, and confiscated her cell phone.

Texting and driving in Utah is now a primary offense (41-6a-1716). The police will hold her cell phone, get a warrant, get her cell records from her carrier, obtain corroborating evidence (my statement and others), and charge her with texting while driving, resulting in a class C or B misdemeanor with fines up to $1,000 and six months in jail. If the offender inflicts serious bodily injury upon another as a direct result of using the device or has a prior conviction the charges can be enhanced. It is good to live in a state where they take distracted driving seriously.

Ride safe – keep the rubber down!