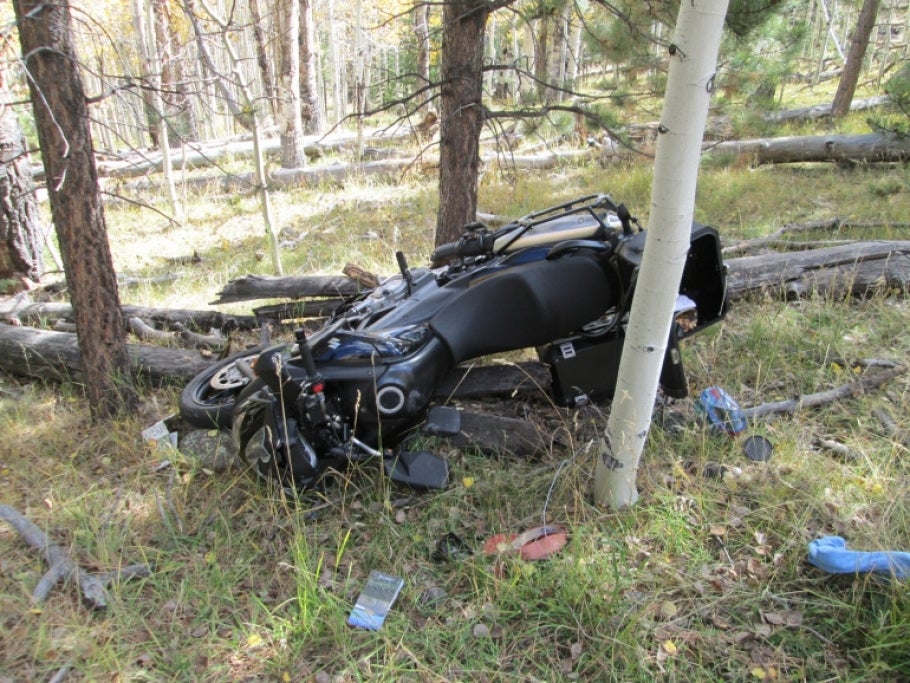 Fox 13 News reported that at around 12:40 p.m. yesterday in Garland County on Sate Route 12 there was a fatal motorcycle crash involving a motorcycle, Boy Scouts, and trees. You can see the brief story and the pictures of the crash at Fox 13 – Salt Lake City.

Apparently the Boy Scouts had been felling trees in the area for fire wood. They were felling trees for firewood after they had received a permit. It is not clear who issued the permit. The motorcycle rider was visiting the area from out of state and from the pictures it looks like the motorcycle is a touring Suzuki motorcycle with luggage racks. Although all of the facts are not in it is reasonable to believe that the tree feelled by the Scouts fell onto the road and the motorcylce immediately happened on the scene crashing into the tree.

If the facts prove to be that the Boy Scouts felled the tree onto the road, and the motorcycle rider did not have a chance to avoid the tree, the Boy Scouts would be responsible for causing the crash – or would they? The ultimate issue of responsibility for the crash will depend on the true facts of course but in all likelihood the supervision of the Scouts was negligent. If there was any possibility of the tree falling onto the road the tree probably should not have been harvested in the first place. If there was a possibility that the tree could land on the road they should have done something to either stop traffic or at least warn traffic that falling trees were a possibility.

There is no happy ending to this story – the Scouts involved feel terrible, the Scout leaders probably feel terrible, the family and loved ones of the killed motorcyclist are heartbroken. Even the police who responded to the crash do not like responding to fatal crashes. Simply saying that no one person or group of persons intended this to happen, in my opinion, is not good enough. When negligence occurs, those causing the harm need to be held accountable – if for no other reason than to stop this from happening again to someone else.

With all of this said a skilled motorcycle attorney with the resources to investigate the crash should be contacted. All involved have my deepest sympathies.

Utah Bike Law and its lawyers are not representing any of the parties mentioned in this article at the time the article was posted. Our information source is cited in the article. If you were involved in this incident or a similar incident and have questions about your rights and options, call us or another reputable law firm. Do not act solely upon the information provided herein. Get a consultation. The best law firms will provide a free consultation. Utah Bike Law and its attorneys are licensed to practice law only in the State of Utah and maintain offices in Salt Lake City, Utah. No attorney client relationship is established by simply visiting this website.