As reported by the Standard-Examiner, on Saturday, Sept. 21 Quintin Redmond, 35 and his wife, Michaela Kerr,30, were involved in a motorcycle accident while heading west on Interstate 80, close to Mile Marker 8. The rear tire on the motorcycle was heavily worn, and failed at around 9:15 p.m. As a result of the blown tire both riders went down. 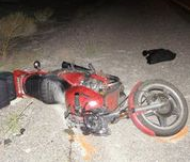 Since Redmond was driving, he was thrown into the eastbound lanes and was hit by at least two oncoming vehicles, which killed him. Redmond was declared dead at the scene. Kerr also landed on the road, but received only minor scrapes. According to a news release from the Utah Highway Patrol, it seems the drivers of the vehicles that hit Redmond didn't know what it was they hit.

Troopers searched for the vehicles, and partially shut down a portion of the freeway. It is undetermined whether or not the vehicles were ever located.

This is a tragic story, and our thoughts go out to the family. However, this accident reinforces the importance of proper motorcycle maintenance. Depending on how often you ride your motorcycle, it may need more or just as much maintenance as your vehicle. Be sure to inspect your bike for anything that might need repair, especially after a long summer of riding, and take it to a shop if need be. If you're more of a do-it-yourself kind of person, check out this article on how to change your motorcycle tires, or check out YouTube for tutorials.