How to Avoid These Common Types of Motorcycle Accidents 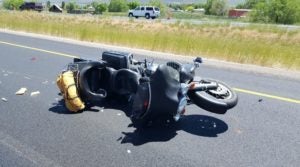 Riding a motorcycle can be dangerous. In fact, motorcyclists are far more likely than motorists to sustain serious or fatal injuries in an accident. Because of this, motorcyclists should do everything possible to avoid getting into an accident. Here's a look at some of the most common types of accidents–and how to avoid them:

Motorcyclists are often hit by cars that  turn left in front of them. These accidents usually occur because the motorist either cannot see you or misjudges how fast you are traveling. To avoid these accidents, it's important to stay aware of your surroundings. If you see a car in this position, slow down and cover your brake until you have safely passed the vehicle. If you're traveling at a slower speed and prepared to apply the brakes, you may be able to avoid a serious left turn accident.

A lot of motorcycle accidents occur when a driver attempts to move into a motorcyclist's lane because he is unable to see the motorcyclist. Some drivers will turn on their turning signals prior to changing lanes, but others will not give any warning whatsoever. Reduce your risk of getting into this type of accident by staying out of other drivers' blind spots. If you cannot see the driver's reflection in his mirrors, he cannot see you either. But, even if you can see the driver's reflection, remember that there is still a chance he could change lanes without checking his mirrors first. For this reason, it's best to avoid riding alongside a vehicle altogether.

Motorists refer to rear-end accidents as “fender benders” because they usually don't cause much damage. But unfortunately, even a so-called fender bender can seriously injure a motorcyclist.

Most rear-end accidents occur when a motorcyclist is stuck in traffic that is either completely stopped or moving slowly. If you find yourself in this situation, stop your bike so it is slightly to the side instead of in the center of the lane. If you see a car rapidly approaching from behind, it will be easier to escape by riding in between two traffic lanes if you are stopped in this position. While you are stopped, repeatedly tap on the brake lever to flash your lights so other drivers see you.

A car doesn't have to be in motion for it to injure a motorcyclist. If a motorcyclist is riding next to parked cars, he could be seriously injured if someone opens a car door right in front of him. If you are about to collide with an open car door, it will probably be too dangerous to try to reenter the traffic lane to avoid an accident. Instead, try to slow down as much as possible to minimize the impact. However, the most effective way to protect yourself is to stay within the marked traffic lanes. Don't ride in the small space between the traffic lanes and parked cars.

Our skilled personal injury attorneys will aggressively fight for the compensation you deserve. Schedule a free consultation with attorney George Tait at Utah Bike Law by calling 801-487-6454 or visiting us online today.