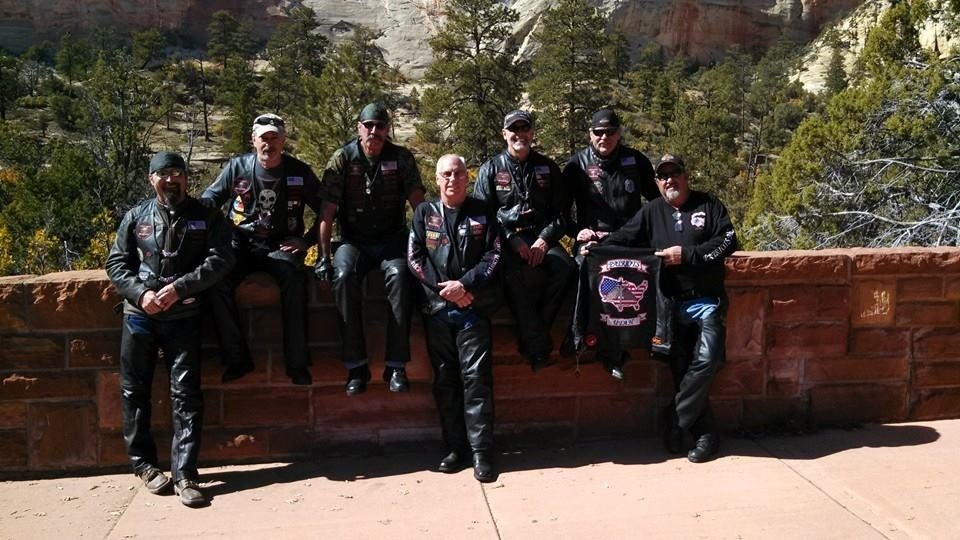 For some, the term motorcycle club conjures up images of outlaws who engage in drug dealing, extortion, and territory wars. While these 1% motorcycle clubs certainly exist (Hells Angels, the Pagans, the Outlaws, and the Bandidos,) they are a minority in the larger collection of American bike clubs. In fact, within Utah we have several incredible motorcycle clubs that not only offer a sense of camaraderie for local riders, but are also giving back to the communities they ride in.

The Patriots are one such exemplary motorcycle club going above and beyond to help the wounded, the unfortunate, and those left behind in Utah. We recently spoke with the club secretary, Popeye to learn more about The Patriots. “Bikers do get a bad rep, but when you look at it collectively, motorcycle clubs tend to donate more than many other types of clubs. For our club, over 90% of the funds we raise go to charitable causes.” Says Popeye, reflecting on the negative stigma attached motorcycle riders. Charity is to members of motorcycle clubs as gasoline and oil are to their machines. For some riders, it's a major reason why they're involved with motorcycle clubs.

History of The Patriots MC

The Patriots were originally formed in Lake County, IL in 2003. There were 14 founding fathers from military and law enforcement backgrounds who banded together to found a motorcycle club for those who have sacrificed their time to protect and serve this great country. The insignia of the PMC features a wing and a sword over the outline of the United States. The sword represents those who have served and fought for the US while the wings represent those who have sacrificed in the line of duty. No explanation should be required for the outline of the United States, but it obviously represents the country we all so dearly love.

The Patriots take no political stance, claim no territory, and have no affiliations with 1% bike clubs. In fact, each member of the club wears a 3% patch to honor the number of colonists who took to the field to actively fight against King George III in the 1700's. Not every member wears the patch as they all have not served in the military. The club has since expanded from the original 14 members, but the focus remains on quality over quantity.

You may be wondering what kind of motorcycles The Patriots ride. The club mandates that bikes must be made in America. Parts can be customized, but factory parts are preferred by most members of the club.

Based in St. George, The Patriots were officially established in Utah in 2011. The founding members of the Utah chapter had all served the country and rode together on a frequent basis. The chapter founders started looking for a cause to join when they came across the Patriots. After a one-year probationary period, the members earned their full three piece patches to become a bonafied chapter of The Patriots MC. A three-piece patch is typically associated with outlaw clubs by law enforcement. However, for those unaware, the three-piece patch simply signifies a true motorcycle club. Since the club's inception, riders have been supporting and contributing to the local community ever since.

The Patriots of Utah

The Patriots are not secretive in any way about their club activity and they can be found riding around various parts of Utah. As any Utah biker knows, we live in one of the best parts of the country to ride in all year around. In the summer The Patriots ride north to catch cooler breezes from the higher elevation. In the winter The Patriots will tend to ride south out of the state towards Las Vegas and Death Valley.

After a long ride The Patriots love to kick back and enjoy a hearty meal while supporting many of the local restaurants and bars. Bout Time Pub and Grub is The Patriots favorite local eatery hands down. “Bout Time does a great job with their food and their very accommodating of our club, but we also like to mix it up and eat at other great local businesses,” Popeye remarked.

The Patriots give back to Utah Community in more ways than just purchasing food. Every year the club donates to Toys for Tots. They not only give money, but they also help to deliver the toys as well. During the holiday season, The Patriots visit veteran's families for Christmas and donate to those families in need. The Patriots perform all kinds of off the wall charitable donations. Just recently in April, The Patriots provided the widow of a Korean War veteran with a check to repair her broken garage door.

In total, The Patriots have raised well over tens of thousands since the clubs inception and this Saturday marks their biggest donation yet.

This Saturday, June 25th, The Patriots will be donating an action trackchair to Sgt. Matthew Prisbrey at the 10th annual meeting of the Utah National Guard's 222nd Field Artillery in Cedar City, Utah. Around 300 to 500 people are expected to attend this wonderful charity event.

Mathew Prisbrey was on his way home from work when he was in a severe auto accident on the evening of July, 23, 2015. He underwent emergency surgery on his brain, to stop the bleeding and to relieve swelling in his brain. He is currently rehabilitating and undergoing therapy in a care center. Matt is a volunteer firefighter in Southern Utah. He has also served in two tours to Iraq and is a combat army veteran. Matt is very active in his community and enjoys being surrounded by friends and family. Matt has a love for anything to do with horses, ranching, and rodeo. He is a great bull rider and fighter. He knows how to work hard and fight tough.

This charitable donation is one of the most ambitious yet for The Patriots. “We definitely had a couple of naysayers saying, oh that's too much money. We can't do that. I wanted to take on the challenge,” said Popeye. The club raised $9,000 from their 5th annual Ride for Heroes and put $8,000 down on the trackchair to secure it. The club is still slightly short from their fundraising goal. If you wish to donate you can contribute donations on their GoFundMe page.

What's next for The Patriots? Popeye and the rest of the club are already looking forward to their 6th annual Ride for Heroes next year. While details have yet to be announced, the club promises that it will be even bigger and better than this year.