The first motorcycle death was that of 46-year-old Carl Mason of Uintah City. The motorcyclist was westbound on I-84 and locked his brakes in an effort to avoid traffic that was stopped for construction according to reports. He slid onto the left shoulder and was thrown from his 2007 Harley Davidson Motorcycle. It is also reported by the Salt Lake Tribune that Mason was not wearing a helmet and suffered injuries to his head and chest. Mason was taken to Ogden Regional Medical Center where he was later pronounced dead. 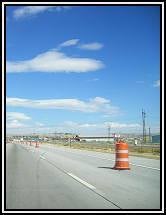 Some reports state that speed is believed to be a factor. There is probably a lot more to this story than meets the eye. I am a motorcycle rider and an attorney who represents injured motorcycle riders. I was on I-15 the other day in my truck returning from Logan when I had to come to a dead stop in the middle of the freeway because traffic had stopped far ahead for construction. There was ample warning with construction signs everywhere and for the next 5 minutes or so we crept along. I rolled down my window and enjoyed the break. What I did notice on the roadway as I approached the construction was a fine sand or silt over the entire roadway. I was thinking that if I was on my Harley my ability to stop would be severely degraded. Furthermore, there is no way that any biker, or vehicle driver would have noticed this fine layer of silt at highway speed.

I bet that the construction crews knew about the fine layer of sand. This knowing would probably place the construction crew and their company at fault for allowing the hazardous road condition to persist. This happens a lot more than we know. Poor signing that is not in compliance with the rules and poor maintenance of construction areas can be deadly for anyone but it is especially deadly for motorcycle riders.

This case needs to be thoroughly investigated by a good motorcycle injury lawyer.