CALIFORNIA: On Saturday April 12, the Roseville Police responded to a accident call on Westbound Douglas Blvd near Sierra College Blvd. It was reported that a motorcyle heading west collided with a Subaru passenger vehicle that was exiting Sierra Nursery & Rock.
The passenger of the motorcycle was airlifted and last reported to have extremely critical life threatening injuries. The two passengers of the Subaru were taken to the hospital with minor injuries.

So far this sounds like an accident that occurs too often. Motorcyclist traveling along the road minding his own business when a vehicle pulls out in front of him causing a crash. This might still be the case until you read the next line in the report.

It was also reported that prior to the accident,
the motorcyclist was pulling a wheelie. 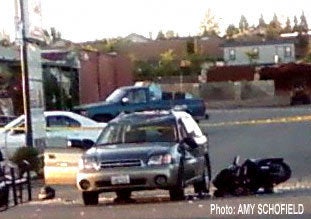