One Motorcyclist Dead & Three Others Injured in Kamas Utah Crash

One of the most beautiful rides in the United States was the scene of a terrible crash on Saturday August 7, 2010. The crash occurred at around noon about six miles east of Kamas on SR-150 also known as Mirror Lake Highway.

Utah Highway Partol Officials say a silver Dodge pickup was heading west-bound when the driver stopped and was waiting to make a left-hand turn. A green Dodge Caravan was stopped behind the pickup truck. A white Trailblazer rear-ended the Caravan which rear-ended the pick-up. The Trailblazer spun into the east bound lane, causing a black Yamaha motorcycle to crash. A Harley Davidson motorcycle also crashed into the Trailblazer. The Trailblazer driver was not hurt and neither were the occupants in the truck and van, but the truck and van were badly damaged.

A couple from Plain City was riding on the Yamaha motorcycle. The driver was a 53-year-old male, and he was flown by helicopter to Intermountain Medical Center in serious condition. His 50-year-old wife was transported by ambulance to a local hospital. The other couple on the Harley motorcycle were from Farr West, Utah. The 53-year-old driver of the Harley died at the scene. His 50-year-old wife was flown to the University of Utah Hospital in serious condition. 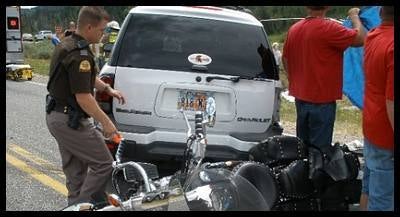 It appears from reports that both couples were not speeding and were wearing all of the safety equipment including helmets. This is just a terrible crash that will need extensive investigation. Police are still investigating the incident and say charges may be filed after the investigation is complete.

My sympathies to all involved in this crash.