At about noon on Saturday June 15, 2013 a semi truck crashed on the southbound exit on I-15 near Spanish Fork, Utah. The truck was exiting the freeway onto U.S. Highway 6. It appears the truck, carrying apples, was going too fast to negotiate the exit and crashed spilling its contents and obstructing the exit. It took about three hours for the apples and the truck to be removed from the off-ramp. As a result of the semi truck crash, traffic backed up on I-15. The crash is reported by Salt Lake Tribune, Fox 13, and Deseret News. 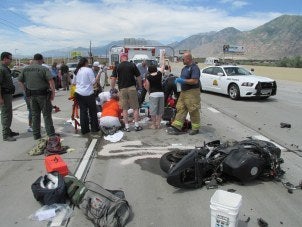 Just before 3 p.m. a woman was southbound on I-15 approaching the backed-up traffic. She made a lane change to the right to avoid the traffic. She apparently looked to her right rear while making the lane change and did see a motorcycle ahead of her that had also slowed for the backed-up traffic. The woman's car struck the motorcycle from behind sending the rider flying and his motorcycle crashing into the car in front of him.

The motorcyclist landed on the roadway sustaining a compound fracture to his right leg, bruising, and head injuries. LifeFlight responded and the motorcycle rider was transported to Utah Valley Medical Center where he is reported in serious but stable condition.

Who is responsible for this crash – the semi truck or the car driver? In the law we often speak of proximate cause. Proximate cause is the act that directly produces an event and without which the event would not have occurred.

In the case above one might argue that the car directly caused the injury to the motorcycle rider. She did not see him, she was traveling too fast, and she made a lane change when not safe etc.

Alternatively, one might argue that the semi truck caused a backup of traffic that necessitated her changing lanes. Therefore it was the semi truck that caused the car to change lanes and crash into the motorcycle causing the injuries.

Utah Bike Law and its lawyers are not representing any of the parties mentioned in this article at the time the article was posted. Our information source is cited in the article. If you were involved in this incident or a similar incident and have questions about your rights and options, call us or another reputable law firm. Do not act solely upon the information provided herein. Get a consultation. The best law firms will provide a free consultation. Utah Bike Law and its attorneys are licensed to practice law only in the State of Utah and maintain offices in Salt Lake City, Utah. No attorney client relationship is established by simply visiting this website.