The Truth Behind These Popular Motorcycle Myths 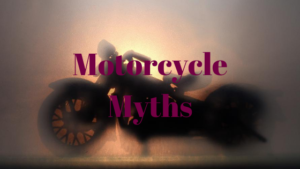 There are a lot of misconceptions out there about motorcycles. Believing these misconceptions will not only make you look foolish, but it can also put you in serious danger while riding. It's time to separate fact from fiction–here is the truth behind these common motorcycle myths:

Myth: It's best to lay down your bike if you're about to crash.

Some motorcyclists believe that the best way to protect themselves in the event of an inevitable collision is laying down their bikes instead of crashing into the other vehicle or object. But, this is 100% not true. Your main priority in situations like these should be shedding as much speed as possible to lessen the impact. Do this by applying both brakes and keeping the bike in an upright position, not by intentionally laying your bike down.

Motorcycles are smaller than other vehicles, so motorists often have a hard time spotting them. It's important for motorcyclists to increase their visibility to protect themselves, but outfitting a bike with loud pipes is not the solution. Noise is not the best way to alert others of your presence. It's difficult for motorists to figure out which direction the noise is coming from, so they may take their eyes off of the road so they can turn around and locate the source of the noise. Don't rely on loud pipes to announce your presence. Flashing your lights is a much better way to alert others of your location, so don't fall for this myth.

Myth: Back roads are safer for motorcyclists than interstates.

Inexperienced riders may prefer to take the back roads because they believe this is safer than traveling on an interstate. However, that's not necessarily true. Interstates are controlled-access roads, which means drivers only enter and exit at certain designated areas. Because of this, motorcyclists won't have to worry about cars suddenly pulling out of a side street. Motorcyclists also won't have to deal with pedestrians, parked cars, or cars that are traveling in the other direction turning in front of them. For these reasons, many people believe that traveling on the interstate is actually safer for motorcyclists than traveling on the back roads.

Myth: A helmet can break your neck in a collision.

The Centers For Disease Control and Prevention (CDC) estimates that wearing a helmet can reduce your risk of death by 37% and of head injuries by 69%. But, some motorcyclists are still hesitant to wear helmets because they believe that it can increase their risk of breaking their neck. These motorcyclists believe that the weight of the helmet will put so much force on the neck in a collision that it will fracture. Fortunately, that's not the way it works.

DOT-approved motorcycle helmets absorb the energy of an impact. If you are not wearing a helmet, the energy from impact is applied to your neck and head instead. This can lead to serious injuries, including breaks and fractures. Wearing a DOT-approved helmet does not increase your risk of suffering a neck injury–in fact, it does the exact opposite.

Have you been seriously injured in a motorcycle accident? If so, seek legal representation as soon as possible. Let our experienced personal injury attorneys fight to ensure you are fully compensated for your injuries. Schedule a free consultation with attorney George Tait at Utah Bike Law by calling 801-487-6454 or visiting us online today.

Utah Bike Law is a motorcycle injury law firm and its lawyers who ride are dedicated to representing injured motorcycle riders and their families.  If you or a loved one were involved in a motorcycle crash anywhere in the United States we invite you to call for a free confidential consultation. There is no obligation and you are not charged any fees whatsoever unless we recover money for you.