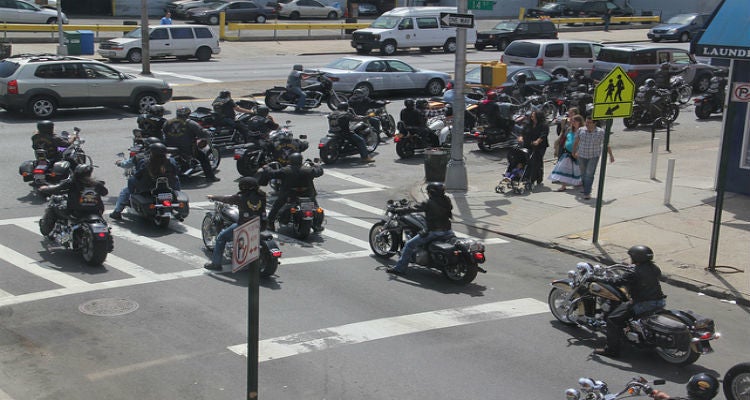 Utah has long been known as one of the best states in the nation to ride a motorcycle. Its huge land area of mostly rural, pristine, and rugged country boasts almost 615,000 miles of celebrated routes, and that's just the preferred ones. A rider heading into the backcountry, off the beaten path, can ride many thousands more.

The unparallelled natural beauty of Utah, with its thick wilderness and mountains, in some areas transporting the observer into an antediluvian world from millions of years ago, makes the state one of the most unique places to ride in the world. There are things to see in Utah that can be found nowhere else.

So it's not surprising that Utah has more than its share of motorcycle owners and riders. As of 2011 there were 59,355 registered motorcycles in the state, and incidentally, 77% of those were Harleys.

Birds of a feather tend to flock together, so where there are motorcyclists, there will be motorcycle clubs. Utah has a number of them catering to people from all walks of life, businessmen, Christians, military personnel, social justice warriors, women, senior citizens, Mormons, atheists, and more. Here's a quick guide to some of the more prominent ones,with the city they're based in and the year they were formed after the name of the club if known, and the  club's name will be hyperlinked if they have a website. It is by no means meant to be comprehensive. After all, where two or more riders are gathered together, there's a club.

Drifters MC, St. George, 1984 – The Drifters Motorcycle Club, formerly called the Desert Drifters, is an independent club made up mostly of riders that live in the southwestern part of Utah. The group is pretty active with a dinner meeting once a month, and usually at least one day-long ride and one extended ride, lasting up to a week or longer, also scheduled on average once a month. Members can participate as much or as little as they prefer, and they ride throughout the year, as long as the weather cooperates.

Salt Lake Motorcycle Club, Salt Lake City, 1942 –  One of the oldest AMA chartered clubs in America. They are committed to providing an environment of enjoyment and entertainment to members and the general riding public while also promoting and advancing the sport and safety of motorcycling. This is a club I have personally donated to and supported at their events.

Hill Riders Association MC, Layton – This club consists mostly of civilian government employees that work at Hill Air Force Base. They accept both men and women and any kind of bike. Rides are scheduled every Saturday, weather permitting, meeting at Northridge High School in the parking lot.

Gospel Grace Riders, Sandy – They state right up front that they're not a club, but they seem to meet all the qualifications for one, so they're included on this list. Obviously a Christian group, they accept anyone with any equipment at any reasonable skill level. They regularly take short to medium distance rides together, and they say they're always looking for new members.

Utah Ruff Ryders, Salt Lake City, 2008 – This appears to be primarily an African-American club, but there's very little information about them online. Nevertheless, they're out there. The link is to their Facebook page.

MCFamily, Springville, 2009 – As the name implies, this is a family-oriented club, so one could assume there's no drugs, liquor, or bad behavior allowed, and kids are welcome on rides and get togethers. That's just an assumption though, again there's very little information available online, just an email address, [email protected].

Utah Riders Association of Triumph, 2014 – Although a newer club, it is already very active and well-organized. Oriented towards owners and lovers of Triumph bikes, owning one is not a requirement of membership, just an appreciation of these legendary motorcycles, and who doesn't appreciate them? With the whole state of Utah as their base, they always have a ride or an event in the works.

The Iron Order MC Utah, Iron Desert Crew, Salt Lake City, 2004 –  According to their website, this club is made up of “hardcore bikers who share in strong brotherhood.” They are a traditional MC and operate by the original rules, and new members have to serve a probationary period. They also make clear that they respect all other MC's, don't claim any territory as their own exclusive domain, and just want to ride and party, not looking for trouble. They have rides that support charities like the Christmas Box House International and suicide prevention efforts.

Barons MC, Salt Lake City – The Barons were founded in Minnesota in the mid 1950's, and quickly spread to other state. It is one of Utah's oldest MC's, and today has a worldwide membership. They were apparently a pretty wild group back in the day, but these days prefer to ride and live and let live, and support several charities while doing so.

Sundowners MC, Ogden – Another old and established Utah MC, and sometimes rivals of the Iron Order MC, the Sundowners also have chapter houses in St. George and Salt Lake City. Organized in the traditional way and very similar to the Iron Order.

Beehive Beemers MC, Salt Lake City, 1985 – Open to anyone with an interest in BMW bikes. A pretty active group, with a monthly breakfast meetup, and many of their activities are family-friendly.

Patriots MC, St. George – A national group of military personnel and veterans, law enforcement, firefighters, and other public safety personnel. Their bylaws state that “It is the goal and general philosophy of the PMC to promote Brotherhood amongst our ranks and look to our founding fathers for direction. It is our goal and intention to be the best public safety motorcycle club in the world.”

Templar Knights MC, Pleasant Grove – Dedicated to the philosophy and ideals of the Templar Knights of the Crusades, they state that they are not a 1% MC, and are not affiliated with any Masonic order, although they do seem to be organized along those lines. Open to anyone with any kind of machine. Another MC I have personally helped with their terrific scholarships to kids who have had parents harmed/killed in combat.

Red Riders Utah MC, Salt Lake City – Open to students and faculty members of the University of Utah, and members of the public with an interest in the school. Any type of bike and even scooters are welcome. Their rides contribute to scholarships to the university.

We want this to serve as a comprehensive list of all of the motorcycle clubs in Utah. If you have a motorcycle club which we failed to mention, contact us directly and we will add it to the list!