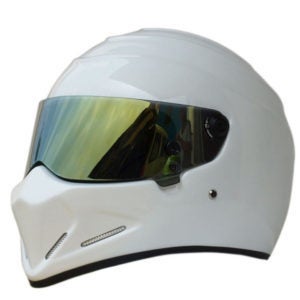 Lawmakers facetiously considered an amendment to allow an exemption to the law but only if motorcyclists are registered organ donors. It may sound like a joke, but it would send a “serious message” to motorcyclists who choose not to wear helmets. Young adult brains are still developing through ages 18, 19 and 20, and requiring the safety standard until age 21 would save more young lives by preventing risky behavior.

Several lawmakers argued against the bill, worried that the new law would encroach on personal freedoms. Libertarian argument breaks down” when considering that a motorcyclist's decision to not wear a helmet impacts not only him if he gets into an accident and dies or sustains brain damage. It also impacts his friends, family and perhaps taxpayers if his treatment has to be paid for through the government. “It seems like a small price to pay,” Hawkes said. “If it saves even one or two lives, that has to weigh in the balance.”

A person under the age of 21 may not operate or ride the following on a highway unless the person is wearing protective headgear that complies with specifications adopted under Subsection (3):

The following standards and specifications for protective headgear are adopted:

If you're riding a motorcycle in Utah (and if you aren't you should be;))) you need to have a basic familiarity with Utah motorcycle laws. The last thing you want to deal with on your ride is a chat with a local policeman. The laws are straightforward and easy to follow once you know them.

Unlike many other states with “universal” helmet laws, Utah law only requires the use of a helmet for motorcycle drivers and passengers who are under the age of 21.

Utah law sets out very specific requirements on the types of helmets considered suitable for minors to wear when on motorcycles. Buy a helmet that complies with Utah law and also provides the most headprotection.

Utah law does not require that motorcyclists use eye protection but it is recommended for safety and for riding enjoyment. The Law also states that who is issued a moving violation while on a motorcycle will be granted a $8 waiver of any resulting fine if the personwas over 21 and was wearing a helmet at the time they were ticketed.

A wrinkle in Utah's motorcycle helmet law would come into play if you were ever in an accident and filed a personal lawsuit against another driver. If you weren't wearing a helmet in some states could be considered negligence, especially if you weren't wearing a helmet in pursuing any head injury damages. But in Utah, the helmet statue states that this kind of evidence is not in play. The failure to wear protective headgear:

So with all that you have read if you are over the age of 21, it is your decision to make to wear a helmet or not. But do some research on helmets and see what suits you the best to wear one or not. And always do research on the best helmet for you, have it sized and fit to you.  There are several to choose from. For example—there is Full Face, Open Face, Half, Dirt Biking Helmets. Etc.